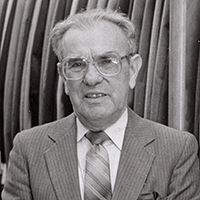 This year, Beckley will host its twenty-seventh Annual Holocaust Remembrance Day on April 15.  In 1991, Max Lewin (1918-2002) began the tradition locally to honor his family and others who perished in the Nazi genocide. This solemn tradition has continued to the present.

The local commemoration, however, would not have happened had Max not decided to tell his story. By best estimates, this occurred in 1990 at a Temple Beth El Havdalah gathering at the home of Samantha Shleser.  It had been 44 years since Max arrived in America and eight years after the passing of his brother Harry. The horrors of the Holocaust continued to haunt Max and he needed catharsis to begin the healing process.

In the video below, three members of Temple Beth El recall what occurred at the close of the sabbath one day in 1990.

Three and a half years before he funded the Lewin Family Bell Tower at The College of West Virginia (later Mountain State University), Max honored his family with a gift to the Beckley Area Foundation.  His generosity prompted the Register-Herald to give Max’s story a wider audience. This first newspaper report of Max’s Holocaust experience was published on January 6, 1991 and is provided in its entirety below.

BAF at age six — and growing

I knew very little about Max Lewin until the last day of 1990. Oh, we had a nodding acquaintance with each other but that was all.

But when someone drops by your office and hands you a check for $5,000, it’s enough to make you sit up and take notice. The check was made out to the Beckley Area Foundation, your community foundation.

“Mr. Lewin,” I said, “this is a magnanimous gesture on your part and we appreciate it very much I’d be interested in knowing what prompted you to do this.”

He sat there thoughtfully. After a few moments, he told me “Well, you see, I’m the last one living in a family of nine. I want to do this as a memorial gift in honor of my family. We were a Jewish family living in Poland where my father, Yochel [Yechiel – Ed.], was a farmer, timberman and dabbled in real estate. He and my mother, Sarah, had seven children to raise.

“The war came in 1939 and the Germans moved in, uprooted us, and put us into forced labor. We were moved about, taken to Russia for a while, eventually moved to Germany and into concentration camps. My parents, two [three – Ed.] sisters and a brother were killed by the Germans.

“The American army liberated those of us who survived in the concentration camps. I was able to contact my brother in Israel who put me in touch with Harry. Harry met me at the airport in New York and brought me to Beckley, and I’ve been here ever since that glorious day in 1946. [Max arrived in New York on former troopship S.S. Marine Flasher on May 20, 1946 – Ed.].

“I’ve been safe and secure in Beckley. I love Beckley and the people here. I’ve had freedom and all the other blessings this country provides. So, I was thinking the other day that I should do something for Beckley to express my thanks for living here. So, here’s my check, put it to good use.”

Max’s brother, Harry, perhaps was better known in the community than Max. After all, he was here first. He had established his own business on Neville Street, Harry’s Men’s Shop, and was prominently identified with Babe Ruth baseball. His contributions to the youth of this town were recognized in the naming of the baseball park on Eisenhower Drive after him. Harry died in 1982 and later was elected to the Babe Ruth Baseball Hall of Fame. He has many friends who remember him.

Max got into the home modernization and renovation business after settling in Beckley, then took over his brother’s men’s store following his death. He operates it today. He has a great interest in sports, too, and is an active YMCA member, walking the track and swimming mostly. What made my day on Dec. 31, 1990 was his recognition that this community had been good to him and, in return, he felt a need to return something of value to it, something that could be placed in trust for generations to come. He saw your community foundation as the place to make this commitment in memory of his family. I think he chose well.

In the years ahead, long after original incorporators and board members of BAF foundation are gone, your community foundation will grow to become a much stronger force for philanthropy in this community. It will do so because people will recognize, as Max Lewin does today, that here is the means to provide a gift to their community that never dies.

It happened this way in Charleston where assets of the 29-year-old Greater Kanawha Valley Foundation passed the $30 million-mark last year. As a result, the income from these assets are plowed back into the community year after year. Last year, they amounted to more than $l million.

Your community foundation will be observing only its sixth birthday this month, but it has grown to $3 million in assets and has returned almost $500,000 to various projects and causes in the community. We wish we could do more.

Although not on the same scale, perhaps, growth will take place here to contribute to human services, education, the arts, public recreation, health and beautification.

We’re looking forward to greeting a lot more Max Lewins in the ’90s.

If you are interested in seeing the complete videos recalling Max Lewin’s first public revelation of his Holocaust experiences, access the links below.