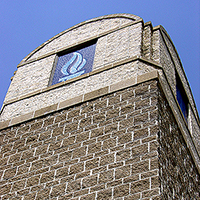 As we look back to that historic day in 1996 when the Lewin Family Bell Tower was dedicated, we are reminded of Max Lewin’s gift – not just to the local university, but to all of Beckley as reminder of that darkest of times.  We will remember those who perished this coming Sunday – April 15, 2018 at WVU Tech’s Carter Hall.  Join us at 1:00 PM for this very special gathering.

Our second installment comes from an editorial written by Dan Page that appeared in the Register-Herald on October 20, 1996 – the day of the Bell Tower dedication.

The issue: The dedication of the Lewin Family Bell Tower today on the campus of The College of West Virginia [renamed Mountain State University in 2001] is a bold and important statement from a Holocaust survivor.

Sixty years ago, Adolf Hitler and storm troopers of the Third Reich plowed through Europe and sowed the seeds of evil.

Today, in a small Appalachian town half a world away from Europe, a survivor of that unspeakable evil will announce to the world that we cannot forget the evils of Hitler and the Holocaust.

Max Lewin, along with officials of The College of West Virginia, will dedicate the Lewin Family Bell Tower this afternoon on the South Kanawha Street campus. A bronze plaque on the tower speaks volumes:

“Six million Jewish men, women and children were put to death in Europe during World War II at the hands of Germany’s Third Reich. The unthinkable brutality of this atrocity is unmatched in history.”

“It must not be forgotten lest it be repeated.”

During the 1930s, young Max Lewin lived in a small Polish town with members of his closely knit Jewish family. Theirs was an ideal life.

Then darkness descended on Europe, and the Holocaust began.

Those of us born in the relative tranquility of America cannot comprehend what Max Lewin and the other victims of the Holocaust endured. In a world gone mad, architects of the Holocaust were bent on destroying some of the finest elements of European culture. It made no sense – except to the power mad.

Lewin’s commitment to memorialize victims of the Holocaust is especially fitting on the campus of The College of West Virginia. After World War II, Max Lewin – his life forever altered – made his way to Beckley to join his late brother, Harry, a local merchant. An instructor at Beckley College, the forerunner to CWV, gave the new immigrant his first lessons in English.

The site of the bell tower, which also provides the handicapped access to an adjacent classroom building, is highly visible. The tower serves as a beacon of remembrance and of hope. Its powerful message – one of the most important ever expressed in our community – must never be lost.

The citizens of Beckley and southern West Virginia have a gentle and caring man, Max Lewin, now 76 years old, to thank for his bold commitment to preserving the memory of those who perished in the Holocaust and for warning mankind that such a monstrous crime should never be repeated. – Dan Page