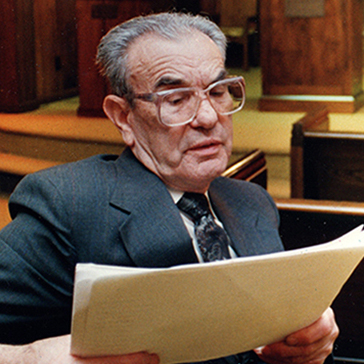 On Sunday, April 15, 2018, Temple Beth El and the Beckley community will be remembering the millions lost in the Holocaust and other genocides.  Twenty-seven years and one day from the first commemoration in Beckley, we will gather to also remember Max Lewin, a survivor, and the members of his family who perished in Holocaust – his wife, parents, sisters Leah and Chaia, and brother Joseph.

In preparation for the service on April 15, we are pleased to provide an article from the Register-Herald dealing with the first such gathering in our city that occurred on April 14, 1991.  Written by Dawn C. Wolfe, the original was published on April 10, 1991.

The well-worn booklet’s pages are yellowed and frayed in places. Its simple brown cover, which has faded throughout years of use, needs no title.

The faded journal symbolizes a part of Max Lewin’s history, and that of his fellow Jews, that he will never forget.

Thumbing through its war-torn pages, Lewin calls out dates and places that serve as a reminder of the Holocaust, the slaughter of European Jews by the Nazis during World War II.

“They came and took my family from our farm in Lipniszki, Poland in 1943,” he said. “That was the year they moved us to a Jewish ghetto in Iwja, Poland.

“Eventually, the Germans killed my father, mother, two sisters and one of my brothers.”

When Lewin was liberated from a Nazi concentration camp by U.S. soldiers in 1945, he bought the book and recorded everything he could remember about his experiences.

He smiles broadly as he tells about his first day of freedom, his least painful memory of that time.

“The German soldiers came with the Red Cross and opened the doors and said, ‘You’re free, you’re free,’” Lewin recalls.

“I walked to a little German house where there was a woman. She gave me milk first thing. I’ll never forget it.” Lewin, 72, believes he is the only surviving member of the Holocaust living in Beckley.

As he recalls the tragic events in his life, his eyes tear with stinging memories that haunt him every day.

“When we were separated, my father gave me a $20 gold coin,” Lewin said, wringing his hands. “I carried that coin in my mouth for a long time, but I traded it for a bottle of whiskey before I was taken to Auschwitz.”

But as sad as his stories are, Lewin asks that the details of his past are not mentioned because he doesn’t want people to feel sorry for him.

“So many people went through the same things I did,” he explained. “I don’t want them to pity me.”

As Lewin was shuffled among Nazi concentration camps, he saw Hitler once at Auschwitz.

Lewin was working as an electrician repairing German war planes in huge factories during that time. He said Hitler walked by him, but said nothing.

Lewin was on the first boat that traveled to the United States, carrying hundreds of Holocaust survivors.

His brother Harry, who had moved to the United States in the 1920s, met him at a port in New York City.

Until his death in 1982, Harry was proprietor of Harry’s Men’s Shop on Neville Street. Lewin now owns the store.

On Sunday, Lewin will lead a special service at Beth El Synagogue on Bellevue Lane, in remembrance of the six million victims of the Holocaust. The service, which starts at I0 a.m. and is open to the public, is part of an international memorial program initiated by the Yad Vashem Holocaust Memorial Center in Jerusalem.

The program consists of reading the names of Holocaust victims and recitation of the traditional Jewish memorial prayer, El Molai Rachamim.

Join Temple Beth El at 1:00 PM on April 15, 2018 at Carter Hall of West Virginia University Institute of Technology at 322 South Kanawha Street.  Let us remember, so we never forget.