Remembering the Dead – The 1995 Yom HaShoah 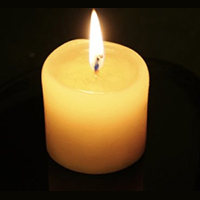 On April 15, 2018, the Beckley community will come together with Temple Beth El to remember those who died in the Holocaust. We are pleased to feature a news story from 1995 that promoted that year’s Holocaust Remembrance Day.  This memory is from the Register-Herald and was published on April 26, 1995.

The 6 million Jewish people who died in the Holocaust will be remembered in a memorial service Thursday in Beckley.

Children will light six candles and speak about the meaning of the Holocaust during the 7:30 p.m. service at Temple Beth-El, spokeswoman Samantha Shleser said.

The congregation will join in saying The Mourner s Kaddish, a prayer for the dead, Shleser said.

The public is invited to the service. The event on the Hebrew calendar is Yom HaSho’ah, Riter said.

The day was set aside by the Israeli parliament as a day of mourning for the victims. But Jews all over the world observe the day to mourn those who died, Riter said.

Dr. Joseph I. Golden Explains the Significance of the Candle Ceremony

Join Temple Beth El at 1:00 PM on April 15, 2018 at Carter Hall of West Virginia University Institute of Technology at 322 South Kanawha Street. Let us remember, so we never forget.